At the beginning of the 1920s, the nation had just emerged from the dark years of the First World War where the power of the industrial age had been harnessed for war bringing death on an mechanized scale. Hundreds of thousands of wounded American soldiers were returning from overseas. Veterans began organizing to support one another reintegrating into society, providing disability benefits, low interest loans, and support for children of vets.

To honor the sacrifices of its vets, the California Legislature set aside a portion of tax revenues for the construction of Memorial Buildings. In Alameda County, between 1927 and 1935, Memorial Buildings were constructed in Alameda, Berkeley, Emeryville, Albany, San Leandro, Hayward, Niles, Oakland, Pleasanton and Livermore.

The largest and most ornate of these buildings overlooked the waters of Lake Merritt in Oakland. It was designed by Henry H. Meyers, the Alameda County Architect. Every detail from the massive pavilion to the light fixtures, tile work and interior color schemes were meticulous studied and designed by the architect to create a grand Beaux Arts facade while the interior had touches of Spanish California. In addition to offices for various veterans' groups, the Oakland Veterans' Memorial would also have a lounge, meeting rooms and a large auditorium for community events.

Facade of Veterans' Memorial in Oakland

Ground was broken in mid-June 1927 and on October 14, 1928 flags were raised and cannons boomed to signal the dedication of the Memorial, attended by the governor of California C.C. Young, the mayor, congressmen and several other dignitaries. 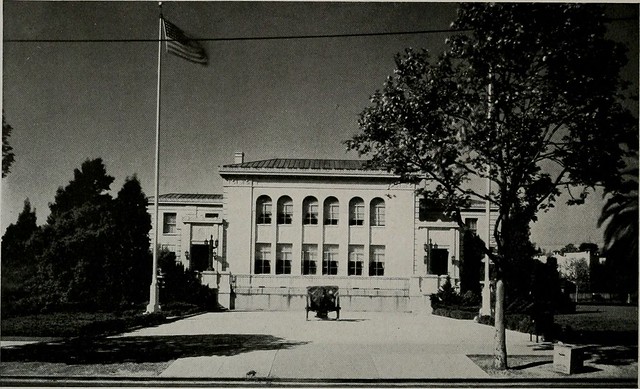 The years following the war were boom times and people wanted to celebrate. Massive dance palaces popped up all over Oakland. One of Oakland's most famous dance entrepreneurs was William (Bill) Sweet. Sweet gave up his job as agriculture professor at UC Berkeley to pursue his love of music and dance. Partnering with his brother Eugene they opened a dance school in Oakland just as the dance craze was taking off. He soon oversaw the creation of a dance empire opening some of the biggest dance halls on the West Coast in the heart of Oakland. Even the start of the Great Depression in 1929 did little to dampen people's appetite for dance. Ticket prices were lowered, and crowds continue to pack the dance halls.

In 1931 Sweet opened the Persian Gardens at Webster and Grand just a block away from the Oakland Veterans' Memorial Building. The contrast between the buildings was stark. The Persian Gardens were decorated in an exotic ornate Arabian art theme. A new type of lighting system called Colorama was installed. Hundreds of colored lights created a myriad of hues and patterns in a moving mural that was projected onto the polished oak floor. This was also the beginning of the Big Band era and Sweets was out in front hiring sharp dressed orchestras to fill the 10,000 square foot dance hall with music. Upon walking inside patrons were transported into a paradise like setting of art, light and sound.

At the close of 1941 America found itself embroiled once again in a World War. Sweet's Persian Gardens was closed and the building turned into a military communications center. But the nearby Sweets Ballroom on Broadway remained open, seven nights a week where big bands played for the masses of laborers flooding into Oakland to work in factories and shipyards supporting the war effort.

When the war ended in 1945, the military moved out and on May 17th 1946 a grand re-opening celebration was held at the Persian Gardens, now renamed the Ali Baba Ballroom. Sid Hoff and his ten-piece band kept the packed floor moving.

By the close of the 1940's the popularity of the big bands began to wane, but the Ali Baba ballroom defied this trend drawing hundreds of dancers on weekends up through the disco era of the 1970s.

On July 17, 1981, hundreds of miles away in Kansas City, over a thousand dancers gathered in the luxurious atrium of the Hyatt Regency Hotel for the weekly tea dance. Crowds filled three skywalks suspended from the ceiling over the floor. Suddenly the steel hangers supporting two of the skywalks snapped. Sixty-four tons of steel, concrete and glass rained down on the dancers below killing over 100 people in the deadliest structural failure in American history.

Following the tragedy in Kansas City, Kaiser Properties, the owner of the Ali Baba Ballroom building, hired engineers to inspect the 50-year-old structure. Significant weaknesses were found in the foundations and support beams throughout. The building was closed so abruptly that there was no time to notify the dancers. As the dance crowds showed up that Friday night, Aug 24, the manager Tony Martin was standing outside to give them the bad news. Despite pleas to remodel and upgrade the building Kaiser properties decided the it would be too expensive to repair and the land would be more valuable to them for other uses. The last active big band ballroom is demolished, and the site is turned into a parking lot. Later, the California Department of Transportation would build its District 4 headquarters on the site

Tony Martin, the Ali Baba owner was unwilling to give up. He scoured Oakland for a new site looking at dozens of buildings. As luck would have it the perfect spot was staring him in the face one block away, overlooking Lake Merritt. Barely a month after the Ali Baba closes, on October 2, hundreds of loyal patrons gather and Sid Hoff's orchestra strikes up the beat once again in their new home, the Auditorium of the Oakland Veterans Memorial Building.

The site continued its focus on dance, featuring big band and live music dances drawing seniors and young people alike. It eventually opened its doors to ongoing renters. Today, under the name Lake Merritt Dance Center, the building hosts multiple local groups offering dance programs for the community of Oakland. Its grand ballroom retains the beautiful design of the past while featuring primarily dance, the art form for which it was originally intended.

View the floor plans for the center
Related Posts

What to Look For in a Wedding Venue Floor Plan